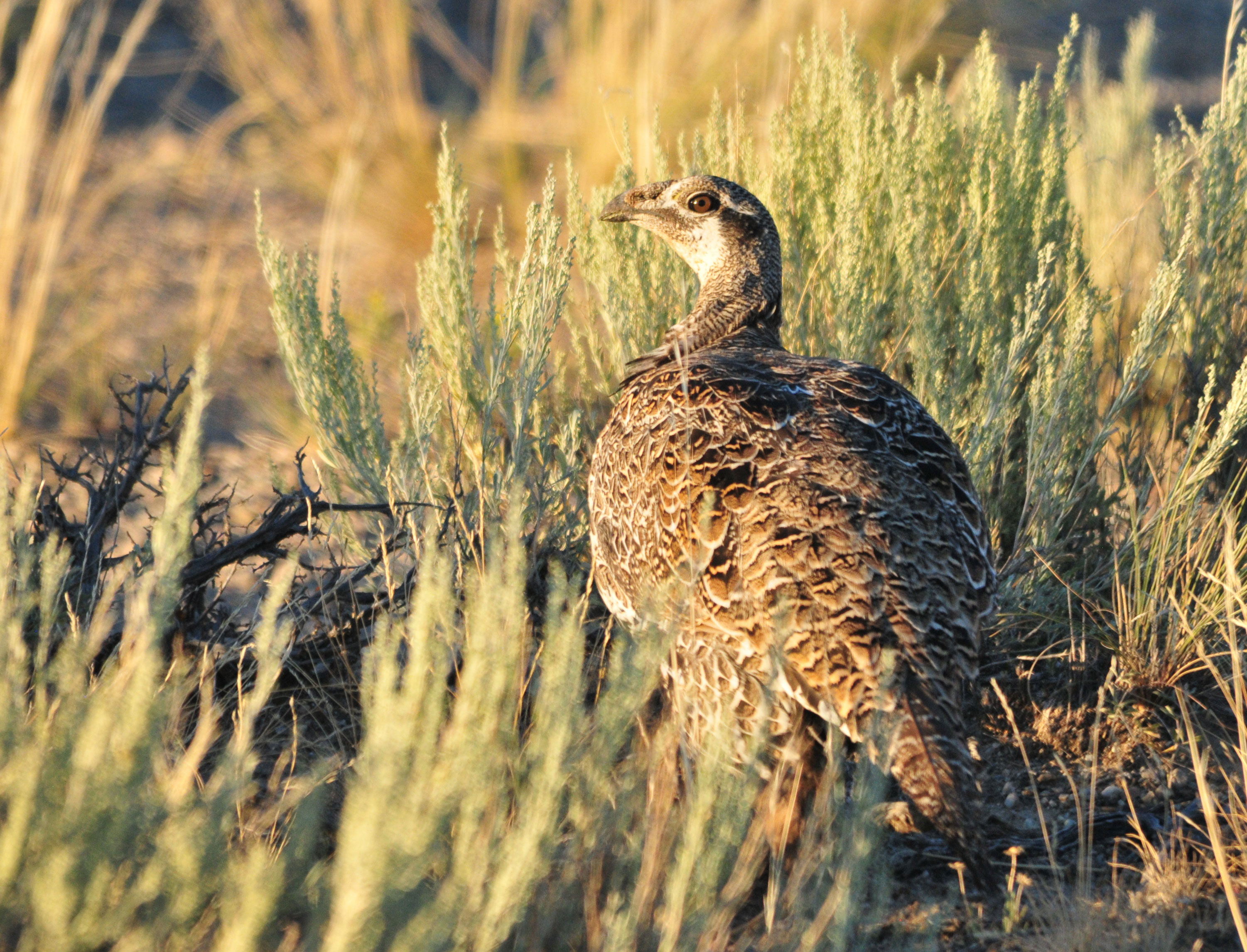 Sage-grouse are iconic ambassadors of the sagebrush ecosystem and considered an “umbrella species”. As a sagebrush obligate species, sage-grouse require large areas of healthy, intact habitat to meet their annual and season resource needs. By conserving habitat necessary for sage-grouse to survive and thrive, more than 350 species of sagebrush associated plant and animals benefit as well.

The greater sage-grouse (hereafter sage-grouse) are a large ground dwelling bird. They can be up to 30 inches long and two feet tall, weighing from two to seven pounds. Females are mottled brown, black, and white which serves as camouflage from predators. Males are larger and more colorful than females with white feathers around the neck and bright yellow air sacs on their breast, which they inflate during their mating display. The birds occur at elevations ranging from 4,000 to over 9,000 feet and are dependent on sagebrush for cover and food.

Sage-grouse depend on a variety of shrub steppe vegetation communities throughout their life cycle and are considered obligate users of several species of sagebrush including Wyoming big sagebrush, mountain big sagebrush, basin big sagebrush, low sagebrush and black sagebrush. In the Bi-State, bitterbrush and other shrub species are also a key component of the habitat. While sage-grouse will feed on wildflowers, insects and forage crops in spring and summer, they depend on sagebrush for food year round, and especially in winter when 99 percent of sage-grouse diet is sagebrush leaves and buds.

During the breeding season, male sage-grouse gather together and perform courtship displays in areas called leks, which are relatively open sites surrounded by denser sagebrush. Males defend individual territories within leks by strutting with tails fanned and emitting drumming sounds from the air sacs on their chests to attract females. The mating season generally begins in March but may vary depending on weather conditions. Females lay a clutch of six to nine eggs from mid-March to mid-May. Sage-grouse hens raise one brood in a season.  Throughout much of the year, adult sage-grouse rely on sagebrush to provide roosting, cover, and food.

The average lifespan is 1-3 years, although sage-grouse have been known to live up to 10 years.