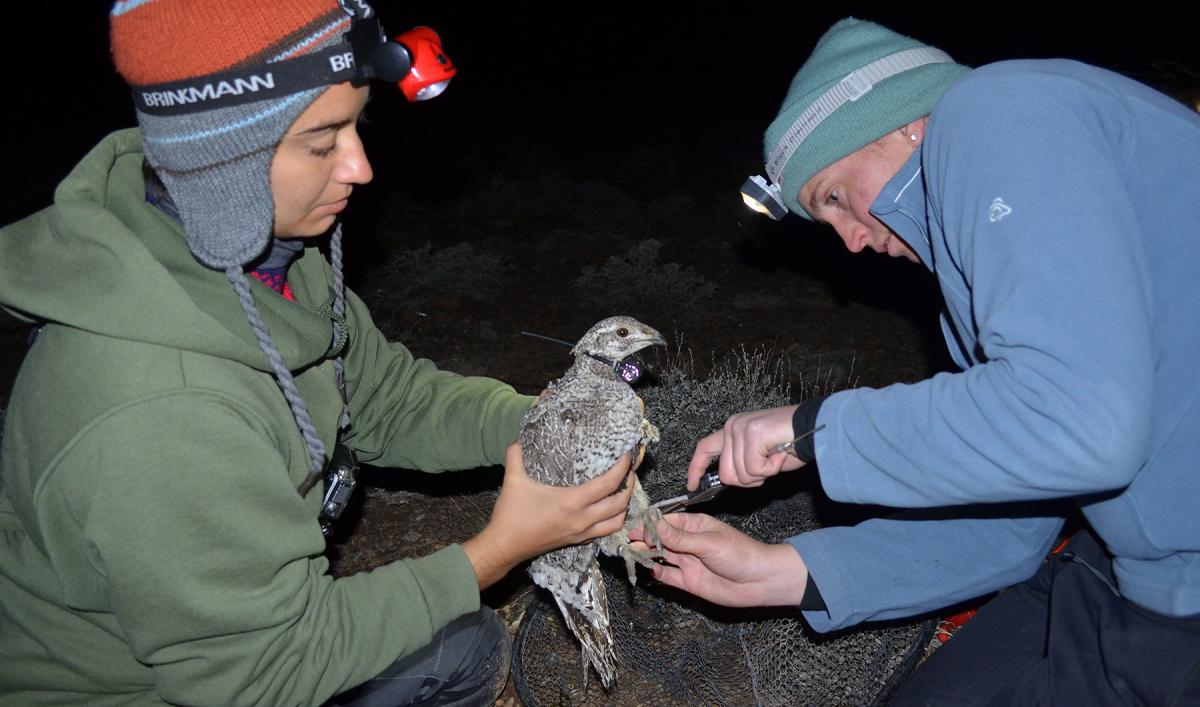 Earth Day meant moving day this year for a group of bi-state greater sage grouse along the California-Nevada border as part of a multi-agency project to save an imperiled sub-population of birds having a difficult time successfully reproducing new young on their own.

“Capturing and moving birds from Bodie Hills is critical to improving the genetic characteristics of the birds at Parker because we’re adding more diverse females and a few more males onto its leks (mating grounds) in hopes that they’ll breed more successfully this year,” said Mary Meyerpeter, a USGS biological science technician, whose team spent a week of long overnights beginning on Earth Day, April 22, 2017, tracking, capturing, measuring and moving about 17 birds.

The bi-state birds are a genetically distinct population and the westernmost location of the greater sage grouse, whose range encompasses nearly 260,000 square miles across 11 western states. 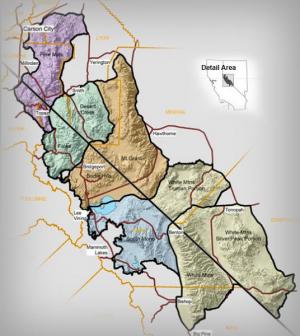 “For nearly the past 20 years, collaboration among local, state and federal agencies and private groups has been the critical key to conserving greater sage grouse in the bi-state area, and this translocation project is the culmination of many years’ worth of ground-breaking science that has been collected and analyzed by a talented group of biologists,” said Steve Abele, a Service wildlife biologist from the Reno Fish and Wildlife Office.

Situated along U.S. Highway 395 just over the Sierra Nevada mountain range from Yosemite National Park, Parker Meadows was once home to nearly 17 male sage-grouse strutting on two leks when CDFW biologists began monitoring the birds in 2002. But by 2016, those numbers had declined to only about four males returning to mate each year on just one of the leks.

Map detail of the population

The Parker Meadows birds are one of six sub-populations of about 5,000 total sage grouse monitored in the bi-state area that encompasses about 45 known leks stretching 170 miles across three California and five Nevada counties. 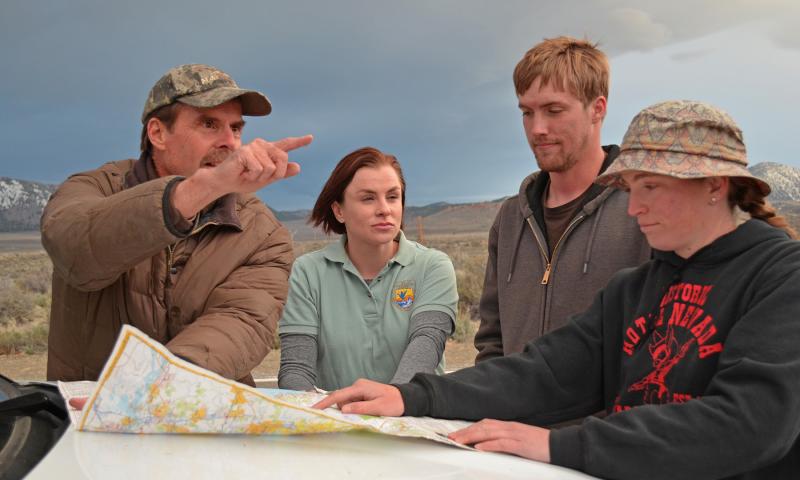 “The research conducted by the USGS showed that the Parker sub-population was declining at a rapid rate due to several factors including small population size and poor egg hatchability,” said Tim Taylor, CDFW biologist. “The science showed that these birds had a 70 percent chance of going extinct within the next five years.”

USGS biologists determined that several threats were working against the Parker birds including the encroachment of conifer trees (pinyon pine and juniper) onto the leks, local development, power lines and barbed-wire fencing. But their greatest challenge was a lack of genetic diversity. Increasingly low numbers of birds coupled with infertility issues has led to inbreeding and fewer nests successfully hatching. 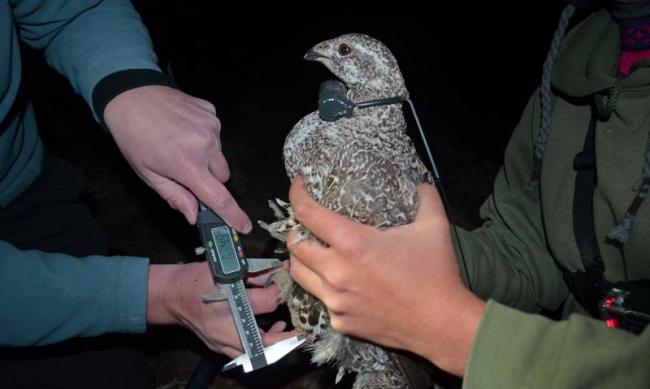 “Survivability comes down to hatchability,” said USGS scientist, Dr. Peter Coates. “Hens need to be successful at laying, hatching and rearing their broods, and their chicks need proper forage and cover to survive. By monitoring birds throughout their life stages we can begin to understand where we can surgically focus our conservation efforts to improve habitat connectivity and increase diversity in their populations.” 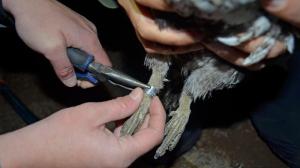 The data it generates can also be plugged into a conservation planning tool that informs biologists when and where grouse need help, and the actions needed to save them. This may mean fence line removal, power line relocation, or a project to remove pinyon pine trees encroaching on a lek so water is available for sagebrush understory plants (grouse chick food) and so their branches don’t provide overhead perches for predators.

An identification band is placed onto the leg of a sage-grouse.
Credit: Dan Hottle/USFWS

In the case of Parker Meadows, the data analysis helped biologists identify infertility problems and a lack of genetic diversity in its declining population that called for the need for translocating the birds.

During the translocation, Meyerpeter’s team of biologists also incorporated a new approach to increasing the move’s success by first artificially inseminating the captured females with sperm from Bodie’s male birds before releasing them onto Parker.

The team is hopeful that a female bird that is relocated after being inseminated will be more likely to bed down and nest in her new environment rather than simply fly away. According to biologists, traditional translocations typically result in roughly 60 percent of birds staying put on a lek upon release. 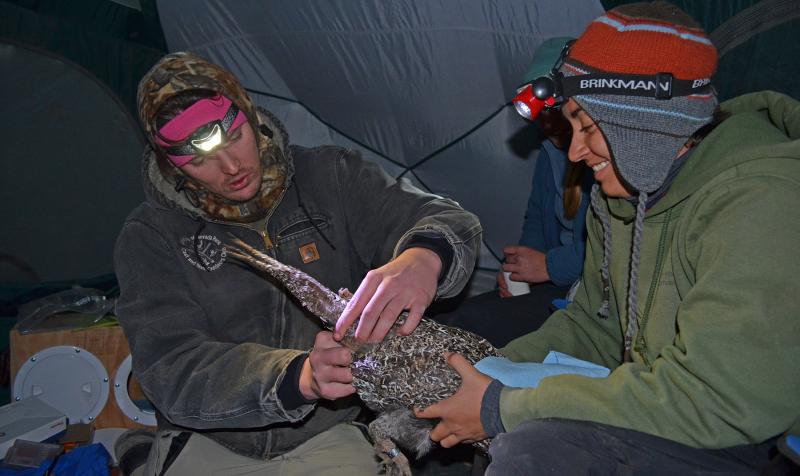 “This is the first season we’ve artificially inseminated sage-grouse as a means to increase nesting rates,” said USGS intern Steven Mathews, a current Idaho State University Ph.D. candidate who also worked on translocation projects in Wyoming, Utah and now California. “If we can show this method is successful, it will become one more tool we can use to help improve the populations and diversity of these birds. This is still new, we’re testing it, and it really is the fun part of science.”

This is all part of the collaborative effort between federal, state, local and private partners to conserve the sage-grouse population in the bi-state over the past 20 years, which contributed to the Service finding the bird not warranted for listing under the Endangered Species Act in April 2015. Since then, nearly 80 other cooperative conservation projects have either been completed, are currently in progress, or have been slated for the future for the continued success of the species. 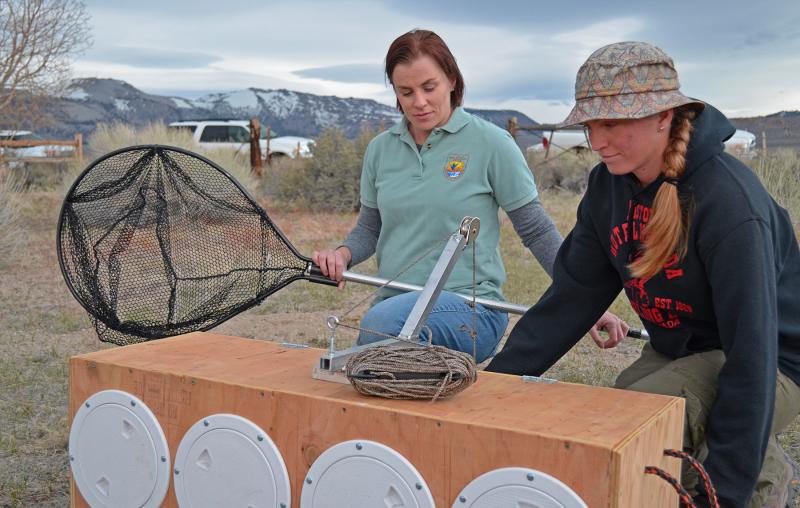 “As the landowner of Parker Meadows, we are proud to participate in such a great example of collaborative conservation that exemplifies one of our agency’s main goals in the Owens Valley – to protect the plants and wildlife on the property we manage that these species call home,” said Bill Deane, LADWP water resources specialist. “Through habitat improvement projects like this we are able to actively participate with our partners to help give birds translocated into this site the very best chance to thrive.”

“In the bi-state, the first question our partners ask is, ‘how can I help?’” said Sherri Lisius, a wildlife biologist from the BLM’s Bishop, California, field office. “This translocation is the perfect example of pushing the boundaries of new emerging science and embodies the notion of dedicated and talented people coming together who truly care about sharing resources and knowledge to help keep the wild places of our beautiful public and private lands wild.”