"The summit was a wonderful opportunity to listen and learn from our tribal partners. The productive discussions... highlighted the importance of the level of meaningful consultation we can achieve with one another."
Humboldt-Toyaibe National Forest Supervisor Bill Dunkelberger

Searching for common ground, Nevada and California state and federal land and wildlife management agencies met with local tribal members at the Bi-State Traditional Ecological Knowledge Summit, June 28-30 in Carson City, NV, to share stories and perspectives regarding management of the Bi-State Distinct Population Segment of the Greater Sage-Grouse.

Tribal members from several Paiute, Shoshone and Washoe tribes throughout the region where this species of sage grouse occurs met for two days with biologists and managers from the Service and the U.S. Forest Service’s Humboldt-Toyaibe and Inyo National Forests, Bureau of Land Management, Bureau of Indian Affairs and the Nevada Department of Wildlife.

According to participants, the goal for agencies was to share with interested tribes the latest scientific knowledge and practices concerning Bi-State sage grouse conservation, while the goal of the tribes was to help the agencies understand the multi-generational cultural significance of the region and its indigenous people.

"It was important to bring together colleagues of western science and the bearers of traditional ecological knowledge in one forum to understand the importance of each other’s viewpoints in conservation of our shared natural resources,” said Sherry Rupert, executive director of the Nevada Indian Commission. “This summit was a big first step in the right direction, and the beginning of many more conversations to come." 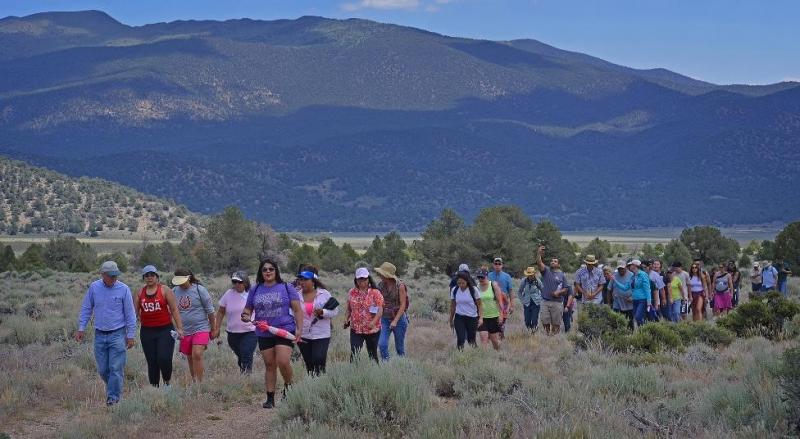 Representatives from several Nevada and California Paiute, Shoshone and Washoe tribes, along with state and federal agency representatives, hike together through the Humboldt-Toyaibe National Forest during the Bi-State Traditional Ecological Knowledge Summit, June 28. Credit: Dan Hottle/USFWS)

Discussions during the summit centered on the commonalities and differences that occur when western science and traditional indigenous knowledge meet (and sometimes clash) concerning matters of natural resource protection.

Although the bird was found not warranted for Endangered Species Act protections by the U.S. Fish and Wildlife Service in April 2015, a great deal of on-the-ground conservation work will continue in its habitat along the California-Nevada border for at least the next decade under the Bi-State Action Plan.

More than 79 conservation projects outlined in the Bi-State Local Area Working Group’s plan backed with $45 million in funding from several federal, state and local partners were a major contributing factor in the Service’s determination that the once-imperiled bird has all the necessary protective actions necessary for it to have a bright future in the region.

Conservation projects include vegetation and species population monitoring, riparian area protection, road and transmission line and other infrastructure evaluation, and conifer removal in areas where pinyon pine and juniper are encroaching on key sage-grouse mating and nesting areas.

The summit consisted of agency presentations explaining the best-available scientific research behind pinyon/juniper encroachment and its impact on sagebrush plant communities and the multitude of sagebrush-dependent species that live there.

In turn, summit attendees sought to identify and define what traditional ecological knowledge is, what it means for Native American people, and how it can be incorporated into western science land management applications. The forum also included of a day-long field trip to a pinyon pine grove on the Humboldt-Toyaibe National Forest where tribal members shared stories about centuries-old traditional pine nut gathers.

At times emotional, summit conversations yielded some positive steps forward to better communicate and share knowledge and resources, along with pledges to include more tribal voices and representation in Bi-state land management project decisions.

Among these accomplishments was the invitation from agencies for tribal members to be present during Bi-State conifer removal projects on or near traditional lands so that the cultural significance of purposefully changing such landscapes for the benefit of wildlife and plant species could be mutually acknowledged.

Another important step taken during the summit was the U.S. Forest Service’s announcement to the tribes that permits for commercial entities to collect pine nuts in traditional areas would no longer be allowed on the Humboldt-Toyaibe and that any commercial activities operating outside of a permit would be enforced, which drew the praise of many tribal members present.

“The summit was a wonderful opportunity to listen and learn from our tribal partners,” said Humboldt-Toyaibe National Forest supervisor Bill Dunkelberger. “The productive discussions and field trip highlighted the importance of the level of meaningful consultation we can achieve with one another. By incorporating traditional ecological knowledge and tribal wisdom in land management we can better support tribal sovereignty through shared stewardship of our natural resources.” 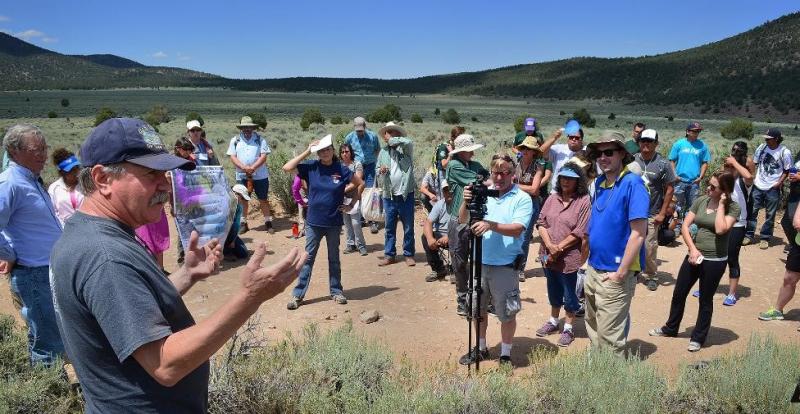 A large portion of the second day of the summit consisted of discussions about the consultation and tribal public outreach process and provided examples of how both agencies and tribes could work better to achieve more positive results. It also highlighted several successful projects where land management agencies have successfully integrated traditional ecological knowledge into their operations and public outreach.

For example, The Nuwuvi Project in southern Nevada is a collaborative effort between federal agencies and tribes in the Spring Mountains National Recreation Area and the Service’s Desert National Wildlife Refuge Complex facilitated by The Mountain Institute and Portland State University and funded by the Southern Nevada Public Lands Management Act. The project utilizes a participatory approach with seven nations of Nuwuvi (Southern Paiute) to create interpretive and educational content for current and planned developments on both public lands conservation areas.

The project not only reunites Nuwuvi people with their ancestral lands and creates new pathways for communication with agencies, but it allows tribal members to participate in the crafting of federal management plans necessary for all facets of the operation, from helping create Environmental Impact Statements to the architectural and engineering plans for new buildings and public displays that incorporate culturally-appropriate traditional knowledge education for visitors.

“I appreciated the time spent better understanding shared values of what ecosystem conservation truly means to each and every individual or group involved and how we might pursue our goals together moving forward,” said Ted Koch, field supervisor, Reno Fish and Wildlife Office. “I also appreciated learning what the word ‘consultation’ means to tribal members in the traditional sense. What I heard is that the most important part of that process is for our agencies to simply, ‘Come, sit, and listen.’”

Most importantly, the summit also provided an opportunity for a younger generation of tribal members to express their views on working together with state and federal government agencies. A youth panel shared their stories on growing up in Native American households and learning their traditional ways from their elders, and provided insight into how they view balancing that traditional life and acquired indigenous knowledge with the western knowledge many were heading off to colleges and universities to learn.

“The summit allowed us to listen to different points of view, and it was such a great experience to represent my people as a member of the youth panel,” said 17-year-old Rosalind Cardenas, Miss Bishop Paiute Tribe, 2015-2016. “All of our lives we have grown up and have been taught to be involved in our communities and learn from our elders, so it is extremely important that tribal youth are engaged in these discussions, so that when we do come back after college with new knowledge and experiences we can help others understand and maintain that balance.”

Dan Hottle is the public affairs officer for the Nevada Fish and Wildlife Office based in Reno, Nevada.