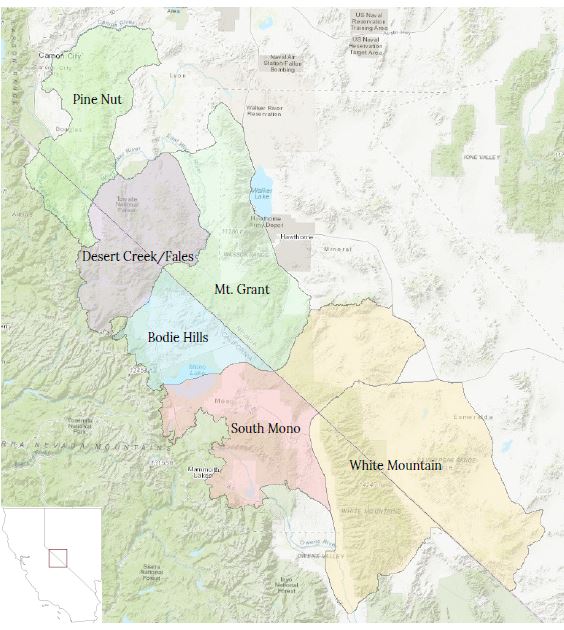 Where is the Bi-State?

The Bi-State area occurs along the California-Nevada border, it covers an area approximately 170-miles long and up to 60 miles wide. It includes portions of five counties in western Nevada: Douglas, Lyon, Mineral, Carson City, and Esmeralda; and three counties in eastern California: Alpine, Mono, and Inyo. Land ownership is composed of federal, state, county, tribal and private lands.

What is the Bi-State Sage-Grouse?

The Bi-State sage-grouse (BSSG) is a genetically unique meta-population of greater sage-grouse, known as a distinct population segment (DPS), that lives in the far southwestern limit of the species’ range in the Bi-State area. This genetic distinction may be the result of natural geologic events and subsequent long-term geographic isolation based on prevailing physiographic and habitat conditions. Learn more about the Bi-State Sage-Grouse here.

What are the threats to Bi-State sage-grouse populations and its habitats?

The primary threats to the BSSG and its habitat vary by Population Management Unit (PMU) (See table for threats by PMU). However, wildfire and conifer encroachment are the highest threats across the entire Bi-State.

What is the current status of Bi-State sage-grouse?

On May 16, 2022, the U.S. District Court for the Northern District of California overturned the U.S. Fish and Wildlife Service’s 2020 withdrawal of a proposed Endangered Species Act listing for Bi-State sage-grouse. As a result, the 2013 proposed threatened status is reinstated, 1.8 million acres is again considered proposed critical habitat, and the USFWS will issue a new final listing decision. Learn more about the listing history of Bi-State sage-grouse.